Young man injured by serpent at the Louvre, Paris, France

3D
Scan The World
3,343 views 316 downloads
Community Prints Add your picture
Be the first to share a picture of this printed object
0 comments

Young man injured by serpent at the Louvre, Paris, France

This sculpture was by Louis Petitot, a French sculptor, who was born and died in Paris. He was the pupil and son-in-law of the sculptor Pierre Cartellier. He exhibited a Young Hunter Wounded by a Snake at the Paris Salon of 1827, which was purchased for the Musée du Louvre, and partly on the strength of it, was invited to produce a standing sculpture of Louis XIV, to be cast in bronze and set up in the place Saint-Sauveur, Caen. It was formally inaugurated 24 May 1828, with such success that Petitot and the bronze-founder, Crosatier of Paris, were each named Chevalier de la Légion d'honneur. The monument was intended to replace the stone sculpture of Louis XIV, by Jean Postel, sculptor of Lyon, which was commissioned in 1684 and erected the following year, but which had been taken down and demolished during the Revolution. 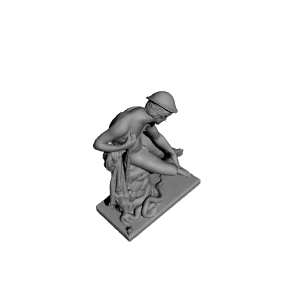 ×
0 collections where you can find Young man injured by serpent at the Louvre, Paris, France by Scan The World