3D
360°
Featured Scan The World
3,642 views 612 downloads
7 collections
Community Prints Add your picture
Be the first to share a picture of this printed object
0 comments

The Young Slave is a marble sculpture by the Renaissance master Michelangelo, dated to around 1525-1530 and conserved in the Galleria dell'Accademia in Florence. The work is part of the famous "unfinished"series of Prigioni, intended for the Tomb of Julius II.

The group are some of the finest examples of Michelangelo’s habitual working practice, referred to as “non-finito” (or incomplete), magnificent illustrations of the difficulty of the artist in carving out the figure from the block of marble and emblematic of the struggle of man to free the spirit from matter. These sculptures have been interpreted in many ways. As we see them, in various stages of completion, they evoke the enormous strength of the creative concept as they try to free themselves from the bonds and physical weight of the marble. It is now claimed that the artist deliberately left them incomplete to represent this eternal struggle of human beings to free themselves from their material trappings.

The figure is more clearly defined, but seems almost bound within himself, burying his face in his left arm and hiding the right one around the hips. The contrapposto pose is quite exaggerated by the narrowness of the block of stone and by the slightly bent knees. The profound study of human anatomy is highlighted in the left elbow and the careful lines of the bent biceps and triceps. His face, which is just beginning to emerge, seems so youthful by comparison with his musculature. Michelangelo always chiseled out the image front to back: it clearly shows within the Young Slave, which appears to be emerging from the rock that shows the rough tracks of the large tooth chisels. 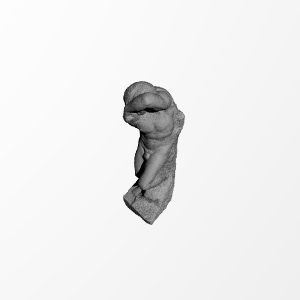