So my sister was visiting with her kids and her 6 y/o is a big fan of the Nick Jr. show Blaze and the Monster Machines. I had freshly printed jakejake's monster truck remix with moving wheels and when the kid saw it he immediately cried out "Its Crusher!!!! Look Crusher!!! Waoooww!!!! " and took it with him..... Yea that was cute :) ...
so anyways they came back a week later and the kid demanded that I show him where I have stashed Blaze and Zeg ..... I had NO IDEA what he was talking about and just pointed him to some other prints of those surprise eggs I had printed (no worries I printed them scaled up to 200 - 300 % so no choking hazard......i guess (: ). Anyways he looked at them and repeated that same request. I asked my sister what he was on about and she told me of his interest in that show and that he wanted those 2 characters and thought I was holding out on him xD.
So to shu...... I mean to please my darling nephew I went on thingiverse to search for the models he wanted. I found blaze easily enough but Zeg did not exist, even outside the verse so I took the challenge and remixed a bunch of models I found after consulting some pics on the internet. Eventually after half a days work this ...... Monstrosity .... emerged. Yea, even I didn't want to upload it .... because just look at it .... anyways I printed it out as I had already put in the time and why not right? (lol ! ya looking at it most of you will give reasons for why not)
I printed this out, and showed it to my sister and her kid. Her expression obviously meant, disappointed (or maybe disgusted?) to say the least anyways what did the judge think ? Well he screamed out "ZEGG!! LOOK MOM ZEGG !!! WAOOWW!! "...........
So yea I won that case! Why you ask ? because Kids.....

Just felt I should share " WHY THE **** am I sharing this.....thing " reason with the world so here is Zeg as how it does NOT look like the actual character and how not to design stuff :).

I would like to thank the designers whose models I used to remix this thing as they have done a good job with their stuff and I do not have any intention of making their models look bad but that's kind of how this model came into existence. Thank you guys.

If some of you do decide to print this do share your makes I would like to see how it turns out or how you guys try to improve this (if such a thing is possible :) )Good Luck and Thank you.

This is only the body which I designed! For the rest of the parts download the Suspension, Wheels and Tires from mv3dnerd's remix as I just reused the base from the previous model I printed.... you know .... "Crusher!!" my nephew even had painted it blue using poster paints :D 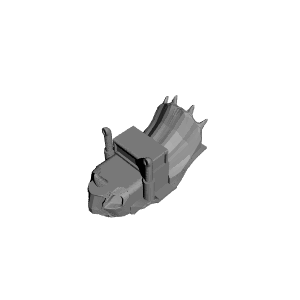 ×
2 collections where you can find Zeg monster machine by okMOK