Zeus seated on a throne

3D
Scan The World
1,508 views 64 downloads
Community Prints Add your picture
Be the first to share a picture of this printed object
0 comments

Zeus seated on a throne

This marble sculpture depicts Zeus seated on the throne with an eagle at his feet.

The Aetos Dios was a giant, golden eagle which served as Zeus' personal messenger and animal companion. According to some, it was once a mortal king named Periphas, whose virtuous rule was so celebrated that he came to be honoured as a god. Zeus, in anger, would have smitten him with a thunderbolt, but Apollon intervened and transformed the king into an eagle and set him beside the throne of Zeus. According to others, Zeus adopted the eagle when it first appeared to him before the Titan War as a sign of good omen.

The sculpture was discovered in Gymnasium of Salamis. 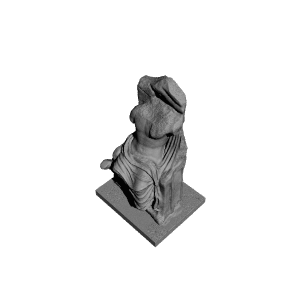