360°
5,141 views 465 downloads
15 collections
Community Prints Add your picture
Be the first to share a picture of this printed object
0 comments

"Within the Adventurers guild, Wizards had a reputation for being stuffy old farts with an over-fondness for pointed hats and old dusty books! Jorla was different though. As a child she had watched her elderly neighbour pouring over his books and reciting incantations. She had listened eagerly and had absorbed an awful lot of information. When she enlisted at the College of Wizards aged 12, they initially laughed her off but they allowed her to take the admission test (mostly for their own amusement). the girl had undeniable talent, but so much power for her age that they couldn't let her go unchecked. They admitted Jorla to the College and put her through her training. A decade later and she is the youngest Wizard to ever graduate from the College, and is determined to redefine what it means to be a Wizard!" 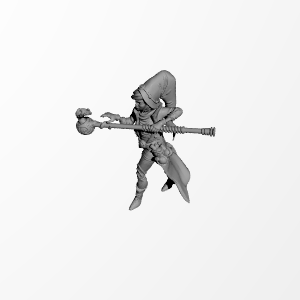