3D
1,212 views 111 downloads
3 collections
Community Prints Add your picture
Be the first to share a picture of this printed object
0 comments

This is a coaster of a storm trooper. The image has a luxury style. A stormtrooper is a fictional soldier in the Star Wars franchise created by George Lucas. Introduced in Star Wars (1977), the stormtroopers are the main ground force of the Galactic Empire, under the leadership of Emperor Palpatine and his commanders, most notably Darth Vader and Grand Moff Tarkin. In The Force Awakens (2015) and The Last Jedi (2017), the upgraded stormtroopers serve the First Order, under the leadership of Supreme Leader Snoke and his commanders, most notably Kylo Ren, General Hux, and Captain Phasma.

Print it with a single or multiple color, with filament or resin..and show me what you guys have made of it.

I have printed this model with Ultimaker white PLA and Performa black PLA. I used 0.25mm layer height and, 18% infill. I used a 0.4mm nozzle with my extruder at 210 degrees Celcius. I used a heated bed. To avoid the curling up at the bottom i used a brim. I paused the print at the point where the stormtrooper logo begins, changed fillament, and resumed the print. Don't hesitate to use your own configuration....no worries!

I picked a logo from my browser and have put it in svg format in inkscape. Opened the svg file in blender and made it a 3D object. In meshmixer i have repaired the file; and erased some aspects. In meshmixer i have also added a coaster. Than i have merged the coaster with the picture after scaling the picture. I made the drinkcoaster in 123D Design using simple model techniques. You can also choose to make a template of a drinkcoaster in another program. For example: tinkercad. Or download a template of my website (https://www.thingiverse.com/thing:3542555). Saved it as a STL file and sliced it for printing. Cause the model has still some issues even after repairing it in meshmixer; i have decided to export it into Netfabb Online Service. This is an app i discovered recently after using MakePrintable. Cause MakePrintable in my opion only gives us 3 procedures of fixing an STL file and, with Netfabb Online Service the frequency of STL fix procedures is unlimited, my choice was clear. It worked well for me and i could slice the model without any problems. 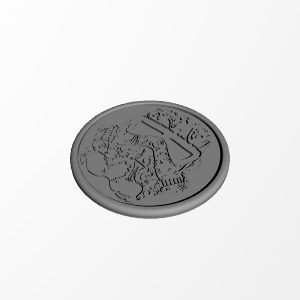