360°
3,106 views 474 downloads
3 collections
Community Prints Add your picture
Be the first to share a picture of this printed object
0 comments

"The gates of the arena opened as the gladiator stood staring at the darkened opening, wondering what he was about to be faced with. A thundering roar ripped through the tunnel growing louder and louder and causing the walls to shake. The gladiator looked on in horror, sweat rolling down his face. He edged closer to the gate hoping to get a better look at his adversary. Another terrible roar sent the warrior’s heart racing, and as the gleam of 2 golden eyes caught the light, panic began to set in. A mighty white lion emerged from the darkness, its body covered in scars. This fearsome creature had clearly seen off more than its fair share of opponents. The warrior hurled his spear in the direction of the lion, but as the point of the spear neared the face of the beast, a huge paw swiped the spear and knocked it from its trajectory. The warrior stood open mouthed at the agility the beast had displayed, and then the Lion pounced, taking his attacker to the ground and disabling him with a crunching bite to the skull." 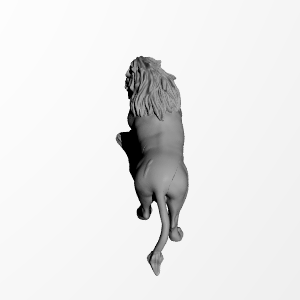