This monthly report gives insights into 3D printable object consumption for the past month: the verticals, the categories, the top designers, geographical markets, etc. in the quest to help 3D printer manufacturers, 3D design software publishers, 3D designers and other 3D printing industry observers, analysts and commentators better understand the demand for 3D printable files. We welcome feedback, ideas for new data publication and comments about this initiative: don't hesitate to contact us.

Number of objects downloaded in July 2017:

Total downloads for July 2017 represent a 3.1x increase (or 211% growth) compared to the month of June 2016. Some 21,391 different objects were downloaded at least once accross June (which represents 68.4% of all objects at 31st July). We have broken down below the most popular object categories by number of downloads. Driven by a hugely popular BULLET BILL / BANZAI BILL designed by Martin Moore (over at @FORGE 3D), the Fan Art category climbed to #1 spot in July. Joel from the 3D Printing Nerd YouTube channel indeed 3D printed this object to somewhat extreme sizes (!) in a hugely popular video. The following categories remain the same, with Toys & Games (see the section below for a detailed study on cost savings), Props & Cosplay, Home & Garden and Scan the World all netting more than 10% of downloads in July.

Professor Joshua Pearce from Michigan Technological University showed in a detailed study that the cost savings of 3D printing toys range from 40% to 90% (based on data from MyMiniFactory for December 2016). This study was reported by maintream media like Quartz, who said:

"In apples-to-apples comparisons, when a product available at retail had an exact analog on MyMiniFactory, factoring in things like the cost of electricity, the mass of the object printed and the cost of a given filament, when compared against prices available at Walmart.com, all filament types saved consumers on average 75% off retail."

Read more about this study and the conclusions for the $100b Toys & Games industry in 3D Printing Industry, ALL3DP, 3Dprint.com and the Toy & Play Futurist Letter. 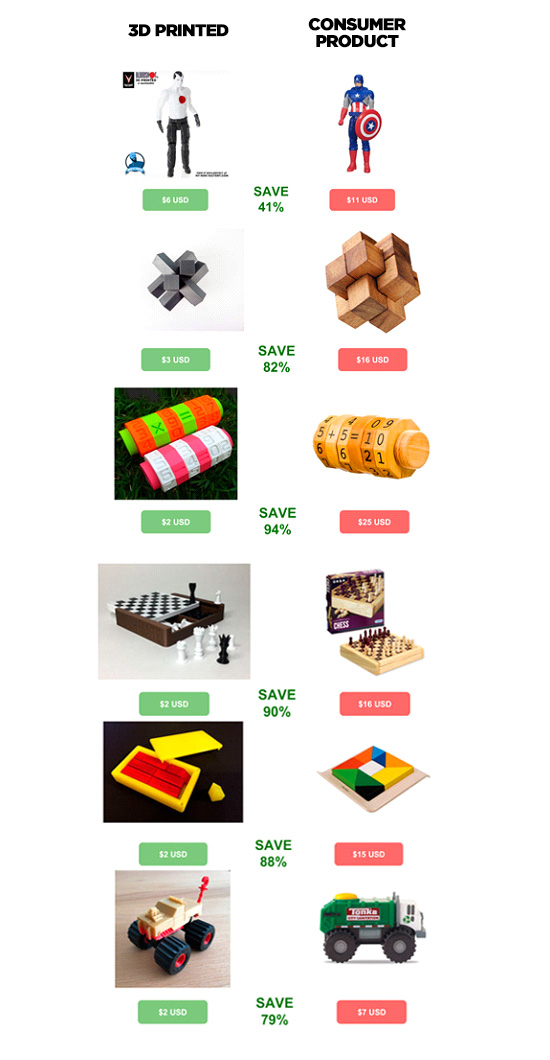 Cost savings are certainly an argument for the digital distribution of Toys, so is the convenience of downloading objects and the added value of the creativity of independent designers.

Below are the top downloaded designers or profiles for July 2017 - designers whose objects were particularly popular for the month. The trio on the podium once again stays the same: Scan the World tops the list, followed by Devin Montes from MakeAnything and Kirby Downey. We see many designers on this list from the MyMiniFactory Studios Program - the fact that they share their work exclusively to MyMiniFactory means an increase in download numbers. These numbers then translate into revenue for these designers.

The map below indicates download percentages by country. Hover over each country to see the percentage of total downloads that came from that location. The top 3 countries remain the same: USA, followed by the UK and Germany.